Now the reptilian brain is not a bad thing—we need it to survive, it supports our action and reaction, breathing and sexuality and much more.  But being so old, it can also want to dominate; so it needs taming.

I also think there is some connection between the reptilian brain and testosterone because so many men, indeed patriarchy itself, seem overly committed to the reptilian brain which is essentially, “I win, you lose.”  When you wrestle with a crocodile usually only one of you wins. 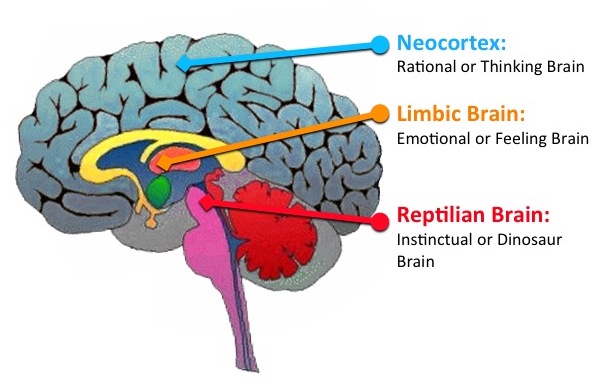 The triune brain. From Anatomy of Our Brain and Neural Computation by Aycha Kurtulush. Image taken from Luisetto, Mauro, 2018.

Why do I believe meditation tames the reptilian brain? Because reptiles are not real good at bonding, but they are very good at solitude–they love to lie in the sun alone.  That makes them monks! (The word ‘monk’ comes from monos or being alone or in solitude.)  So to meditate is to pet the crocodile inside you and say, ‘nice crocodile, nice crocodile, calm down.  Be still.’

This short four minute video describes the process of practicing mindfulness, and the chain of events that happens in our brain as we practice. Video by Juliet Adams.

Our creative and intellectual brains have to decouple some from our reptilian brains and recouple more with our compassionate brains.  Then we—and our species—will be better citizens to each other and ourselves on this planet.

Meditation and contemplation assist us in this de-coupling and re-coupling.

Emptying or kenosis is part of meditation which is a deep letting go. Humans can let go of an infinite amount of things–we are capable of vast emptying.  We can empty the mind of bad memories and anxious thoughts and even thoughts altogether.  Contemplative practices assist in such efforts to empty.

In true dialogue, both sides are willing to change.

You Are LoveD – Yard Signs

Visit Us On Crowdcast